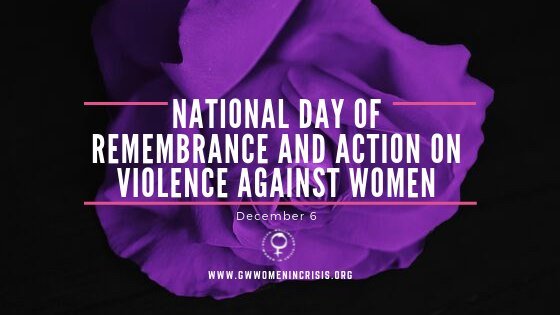 Join together to REMEMBER, REFLECT and RESPOND, 30 years following the events that took place December 6, 1989 in Montreal.

30 years later and we continue to experience the harm of gender-based violence. On average a woman is killed every 6 days by an intimate partner. We can not forget the events that took place 30 years ago. We need to continue to draw attention to the continued impact of gender inequality and the severity of woman abuse.

Together, we can take the pledge to continue to educate, support and work towards gender equality and social justice to create a word free of gender-based violence.

On December 6, 1989, 13 female students and a female administrator at l’École Polytechnique de Montréal were murdered because they were women. The shocking impact of their deaths led Parliament to designate December 6 as a national day of remembrance. Nearly 30 years later, the effects of this tragedy continue to be felt and women remain targets because of their gender.

The National Day of Remembrance and Action on Violence against Women is about remembering victims; it is also a time to take action. We each have the opportunity and the responsibility to stand up against misogyny, sexism, and hate — and it starts with creating a culture of respect.

As well as commemorating the 14 young women whose lives ended in an act of gender-based violence that shocked the nation, December 6 represents an opportunity for Canadians to reflect on the fact that women in Canada, and around the world, continue to face disproportionate levels of violence each and every day.

It is also an opportunity to consider the women and girls for whom violence is a daily reality, and to remember those who have died as a result of gender-based violence. Finally, it is a day for communities to consider concrete actions to eliminate all forms of violence against women and girls.

Programs & Services
Words of Thanks
“I knew he would kill me if we left; you gave us a safe place to stay. I’m no longer afraid for the safety of my children. You saved my life. Thank you for everything.” - Sarah